What is intraoperative neurophysiological monitoring (IONM)?

IONM is a set of neurophysiological techniques that are used to monitor the function of the nervous system during a surgical procedure, in an objective and effective way.

IONM includes techniques such as monitoring the neural and motor pathways of the spine, cortical and subcortical mapping of the brain, continuous peripheral nerve electromyography, or continuous electroencephalography.

This monitoring is a tool for detecting and measuring any changes in neurological function instantaneously, in real time, so that we can react in time to take any steps needed to prevent neurological lesions during the operation.

The procedures involved do not cause the patient any discomfort because they are performed after the patient is already sedated.

What surgeries is IONM recommended for?

IONM is recommended for:

SURGERY OF THE SPINAL CORD AND SPINAL COLUMN

SURGERY ON THE PERIPHERAL NERVE

What are the benefits of intraoperative monitoring?

1. To prevent damage to the neurological structures that can be at risk during certain surgical maneuvers. To alert the surgeon in time of a possible complication so that they can take measures to correct the problem, reducing the chance of permanent neurological damage.

For example, during scoliosis surgery, monitoring of the spinal cord using evoked potentials can provide early alerts of some damage about to happen caused by a surgical instrument or unintended movement, or due to excessive manipulation.

2. To identify specific neural structures and reference points that are not easily identified by anatomy alone. This technique is referred to as mapping, and consists of electrical stimulation of the cerebral cortex to see which areas are activated. During this process, the patient is awake, and talks or performs some other activity (playing the violin, for example). In this way, the neurosurgeons can determine which areas are safe to touch or not,  by observing whether it interferes with the patient’s activity. 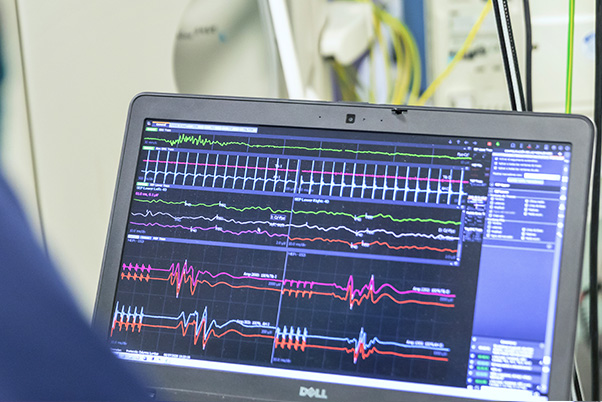 3. To provide the surgeon with continuous information on the functional integrity of the neural structures at risk, confirming that the surgical strategy is appropriate, in order to perform a more aggressive surgery, optimizing the safety margins in the resection of tumors.

4. To identify any serious systemic problem that needs to be dealt with.

5. To evaluate the effectiveness of a corrective action or surgical procedure. For example decompression of the nerve root in the case of radiculopathy or the removal of a clip from an artery that had led to a stroke.

6. In the case of lesion, it predicts the neurological prognosis, which helps improve the postoperative clinical process for the patient.

What techniques does IONM involve?

Intraoperative neurophysiological monitoring uses various recording techniques to continuously monitor nerve structures. The use of a combination of these techniques is called multimodal monitoring, which gives us a high degree of sensitivity and specificity of close to 100%.

The kinds of techniques, the locations to be recorded, and the site of stimulation are always decided specifically for each case. It depends on which structures are at risk in each surgical procedure.

These give us information on the functional integrity of the entire sensory pathway (peripheral nerve, spinal column, medial lemniscus, thalamus, and somatosensory cerebral cortex).

They are obtained by stimulating the median or ulnar and posterior tibial nerves, using subcutaneous electrodes placed at the level of the wrist and the tibia.

The evoked potential is also recorded in the scalp with corkscrew-like electrodes (cortical SSEP), in the epidural space using an epidural catheter (spinal SSEP) or directly in the cerebral cortex using an electrode strip (reverse phase) depending on the type of surgical intervention.

These provide information on the functional integrity of the corticospinal tract. They are obtained via transcranial electrical stimulation (TES), with electrodes attached to the patient’s scalp.
Another alternative is direct cortical stimulation (DCS), using an electrode strip and recording the potential in the muscles of the upper and lower extremities with subcutaneous electrodes (muscle MEP) or recorded in the epidural space in the spinal cord using a catheter (D waves).

These give us information on the motor pathways from the cortex to the cranial nerve nuclei. They are obtained by TES using corkscrew-like electrodes on the patient’s scalp, and registering the motor potential of the muscle depending on each cranial nerve (CN).

They give information about the auditory pathway up to the midbrain. They are obtained by monaural stimulation with clicks by means of helmets, homolateral recordings obtained with subcutaneous electrodes placed on mastoids and another corkscrew electrodes placed on the scalp at vertex level.

These give information on the integrity of the visual pathway. They are obtained with flashes of light using special glasses, and recording the potentials with corkscrew-like electrodes attached to the scalp.

This gives us information on the integrity of the eyelid reflex arc in which the cranial nerves V and VII and their brainstem connections are assessed. It is performed by stimulating the supraorbital nerve through subcutaneous electrodes placed in the supraciliary region and recording the motor response in the lower eyelid.

It gives us information on the integrity of the reflex route to avoid damage that could cause a disorder in urination, defecation and sexual function.

Electromyography records the spontaneous muscle activity. It gives us information about the integrity of the nerve pathway between the peripheral nerve and the muscle. It is obtained using subcutaneous electrodes placed on different muscles depending on the procedure.

This records the spontaneous brain activity. During vascular brain surgery, it allows us to determine if the brain is receiving enough oxygen, to evaluate the level of anesthesia, and to prevent epileptic seizures. It is obtained using corkscrew-like electrodes on the patients scalp.

These are techniques that, through electrical stimulation, allow the anatomical identification of specific neural structures. It is used in the following surgeries: