What are epidural infiltrations?

This is a minimally invasive procedure that consists of injecting steroidal anti-inflammatory drugs - derived from cortisone -, alone or with local anesthetics, into the medullar canal, in the area surrounding the membranes that surround the medulla, called the epidural space, in order to alleviate the pain.

Spinal pain, whether accompanied by irradiation or not, is one of the most frequent pathologies among chronic diseases. Studies report up to 54% to 80% of people will suffer it at some time in their life. Studies of the prevalence of low back and cervical spine pain and their impact on general health show that 25% of patients have low back pain grade II-IV (severe pain with disability) and 14% have cervical pain of the same degree.

What cases is it used for?

Epidural infiltrations are used to treat pain caused by the following pathologies:

STENOSIS OF THE SPINAL CANAL

PAIN IN THE LUMBAR SPINE

PAIN IN THE CERVICAL SPINE, IRRADIATING TO THE LIMBS AFTER LAMINECTOMY SURGERY

In cases of irradiated pain, either lumbar or cervical, that is secondary to a disc hernia, infiltrations of corticosteriod are delivered as close as possible to the affected disc and nerve root, that is to say, in the ventrolateral epidural space.

Patients with irradiated pain are three times more likely to respond to infiltrations in the epidural space than those with only low back pain. The epidural approach is also used to perform epidurolysis and epiduroscopy, as well as pulsed epidural radiofrequency with a metallic catheter. 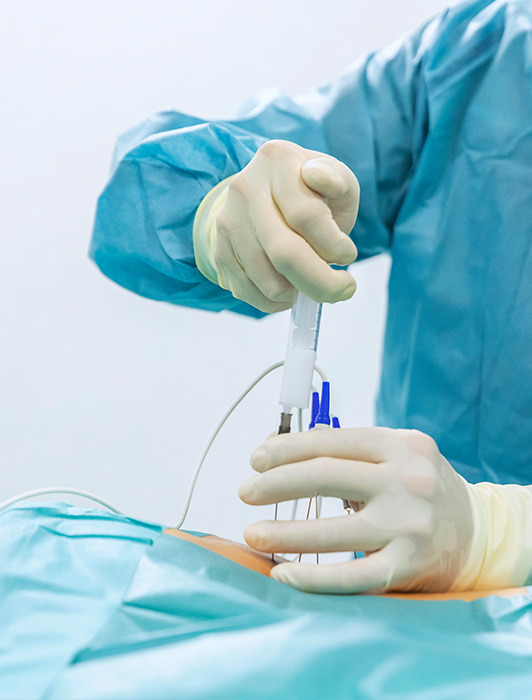 What is involved in the procedure?

The following approaches can be used to perform the infiltrations:

In the past, interlaminar and caudal techniques were always done blindly. However, there are several studies showing that blind epidurals performed by experts fail in the correct location of the space up to 30% of the time. To improve this, it is currently recommended that all procedures involving an epidural approach be performed under fluoroscopic control in operating rooms or rooms prepared with resuscitation material and performed by experts who can recognize and treat the potentially serious complications of these techniques.

The patient lies face down with the head to one side, in a slightly flexed position with an abdominal pillow to improve flexion of the spine and better visualize the epidural space.

After choosing the level, a medial or paralaminar approach can be tried, entering the ipsilateral epidural space on the affected side. Sedation should not be used, or it must be very light. The sterile needle is inserted, trying to find loss of resistance, checking frequently by x-ray.

This approach is performed under the same conditions as the interlaminar, and enters through the sacral hiatus. It is generally not difficult to enter through this hiatus, after palpation of the two sacral horns and traverse the sacrococcygeal ligament. The position is monitored with contrast with the lateral position x-rays. To reach the affected level (generally L5-S1 or L4-L5), it is necessary to use a greater volume of medication than for an interlaminar infiltration.

The same technique is used as for the lumbar epidural, although some authors prefer to do it with the patient seated, and always guided by x-ray imaging. In this procedure, it is easier to reach the anterior epidural space with the injected liquid than in the lumbar area, which is the reason that cervical epidurals tend to be more effective.

This intervention is safer to perform at the upper thoracic levels, by inserting the epidural catheter to the affected level. X-ray imaging in the lateral position is very complicated because of the superimposition of the images of the shoulders, so oblique projections are used.

It is recommended that the patient get plenty of rest for the following 24-48 hours. After that, they should begin a program of spinal rehabilitation, as multidisciplinary treatment is essential for recovery.

The possible complications of epidural injections are mainly of two types: those related to needle placement, and those caused by medication. Among complications observed, the most frequent are insomnia on the first day, transient headache, increased low back pain, vasovagal reactions, nausea, or other minor complications.

Despite the risk of these complications, when the appropriate procedures are followed, epidural infiltrations are considered safe and effective.

Who are the doctors at Instituto Clavel who perform epidural infiltrations?